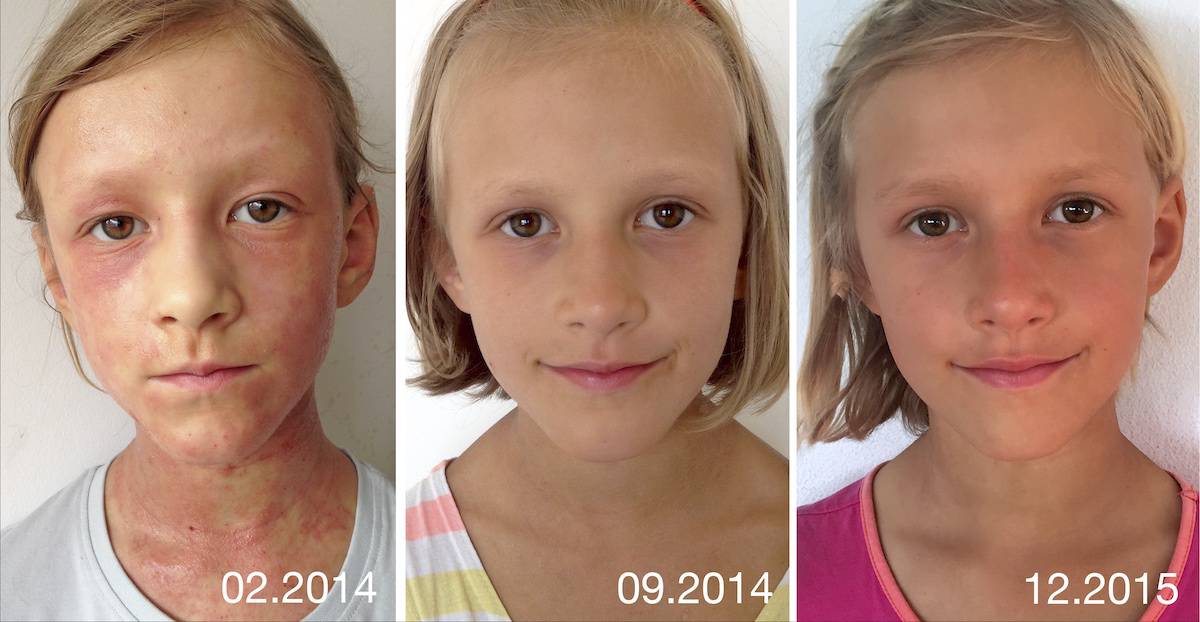 IT HAS BEEN OVER A YEAR SINCE MAYA BEFORE/AFTER, LET’S DO AN UPDATE-REWIND what has happened over the last year, broken down month by month with pictures and videos. I want this blog to be helpful during the healing process you might be going through.

Since the time I have published her results many things has happened and changed. I wanted to share our YEAR OF LIFE to inspire those who struggle with diet and recovery and also to clear some of the information about the symptoms and events that may happen ALONG THIS PROCESS and can be very confusing. I will link each month to a video from our You Tube, that will illustrate what we were doing, were have we been at the moment and how Maya’s skin looked like. 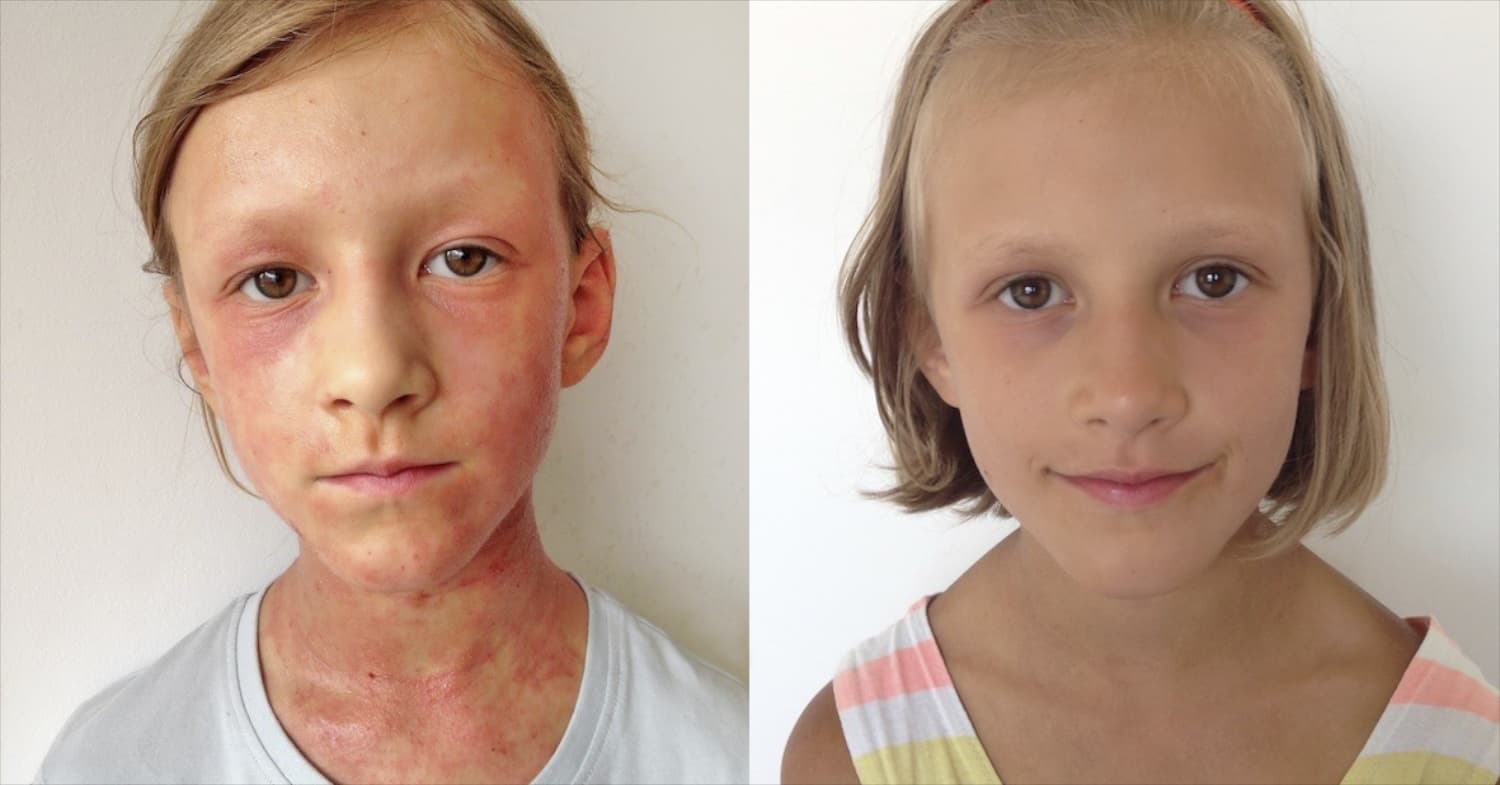 It’s been about 1,5 years since Maya’s eczema journey has begun. We started our raw food diet on 1st of April 2014 and about 6 months later Maya’s skin became about 95% clear, getting better and better over next months.

Until that point my kids have been on fully raw diet 100%, not even one time exception, and also always limited fats. Maya’s skin was clear on her face and neck, there were still little spots left on her hands and behind her knees, but I could see them going down each day. It was clearing. Soon after publishing a blog with Maya’s BEFORE/AFTER I have decided to let my kids enjoy some potatoes at dinner time. They really wanted a bit of cooked foods to have back in the diet, so I thought to myself why not. Since then we were constantly going back and forth with cooked dinners, and it continues this way till now. I am being extra careful and do not just go the whole nine yards yet.

So, my kids (Maya and Travis) would eat about 2 medium potatoes with a big bowl of salad made out of: (lettuce/zuchini/avocado/cucumber/carrot/radish/tomatoes/scallion etc – I would mix 2-3 ingredients at a time to make a variety of salads for each day).

After about 2-3 weeks having those salads, I have noticed on Maya’s neck some dry skin as well as on her cheeks, which was a warning for me, and I have decided to go back to fully raw again. 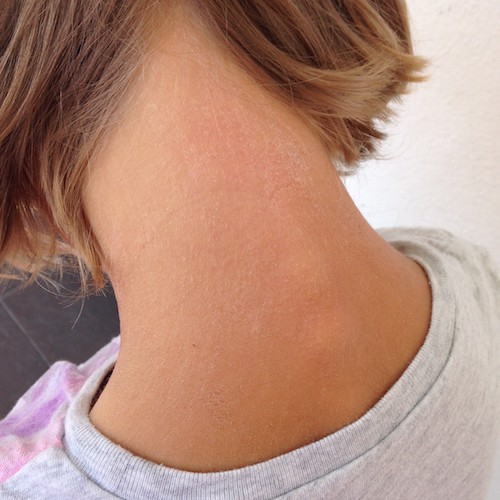 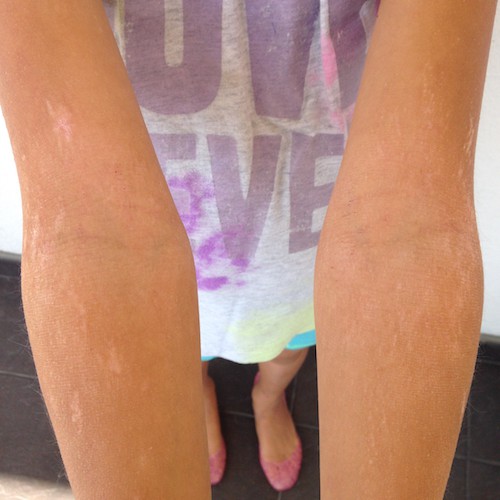 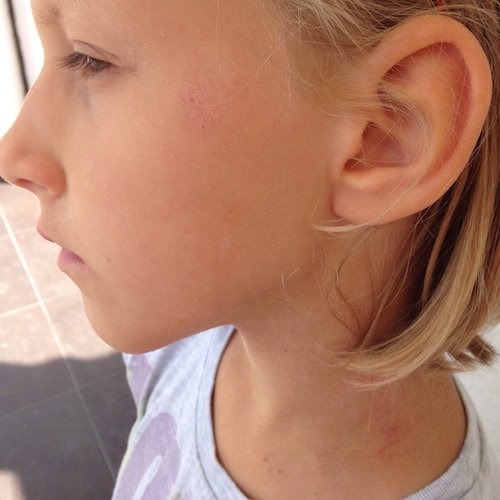 The skin got a bit worse. It wasn’t getting much worse but it wasn’t also getting better at the moment. I was very confused. I continued with raw food back again. In the meantime the weather started to change and there was more rain, less sun. Maya’s skin was staying pretty much the same, around 90% clear and still slowly healing. The neck got also better after stopping the potatoes.

THIS IS A VIDEO FROM SEPTEMBER:
https://youtu.be/2-zOQPSWOPg?list=PLbtZICxQxdjJxP1frUTJVx-5agaQyVZTO

2) OCTOBER 2014:
We were leaving Portugal and traveling to Spain. We have experienced a car crash and actually we’ve lost our car in Spain. This has been a moment when we have decided to go back to Poland, to figure out what to do next about our future travels. Our original plan was to stay in Spain, but without a car it was just impossible. Getting a new one was one option, but since we have experienced a lot of car trouble over the entire summer, we took this event as a warning and a sign, to just do something else instead. We simply thought – how about flying to the tropics to stay there for 1-2 years, till the kids will get fully better? This idea came to life
The weather was getting cooler each week, but it was still pretty sunny and kids had a lot of quality outdoor time. During traveling and moving our kids were eating according to a diet, we were back on fully raw with maybe occasional steamed veggie along their salad, as far as I recall. 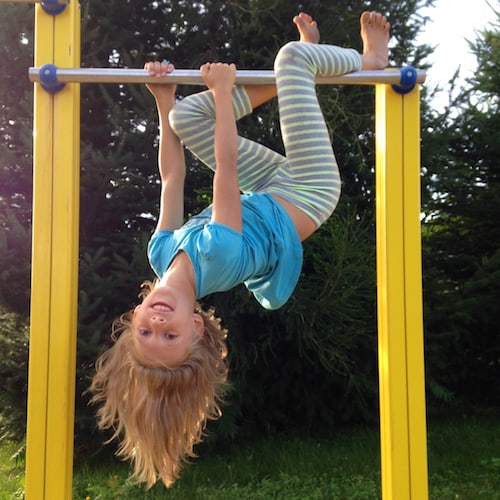 There was one major slip on diet during plane flight (Spain-Poland) and unfortunately it has cost us a lot. Being on a plane is actually for us the most difficult moment, because we depend so much on very limited resources.
Here is a blog post about what exactly happened with the food on our journey to Poland: http://www.dehappy5.com/2014/11/05/cheat-day-on-a-diet/

HERE IS A VIDEO FROM OCTOBER:
https://www.youtube.com/watch?v=lsbRc7Wvg1A&list=PLbtZICxQxdjJxP1frUTJVx-5agaQyVZTO&index=16

We have spent entire November back in Poland. The weather was cold, sometimes even very cold. We were organizing and planning the trip, kids were continuing with a diet, still fully raw, with occasional steamed veggie, but no starches, no cooked meals. Maya skin was getting better after the “plane food”, we have learned that it is very important to be prepared and she really cannot have gluten yet, she reacted very badly.
Her skin on the face became pretty inflamed. I also could see that the boys were having circles under their eyes a bit and their skin was pale. I had a feeling they were not receiving enough of sun to get enough of vitamin D, that will help with mineral absorption. We were planning to go to Thailand and I was just hanging on to the idea of being in the sun very soon and having an abundance of fresh and juicy fruits, that will just simply solve the problem. The kids were doing pretty great, I know they had a good supply of energy from the great summer in Portugal, but the change was necessary and I think, that without going to Thailand it would have been pretty difficult and it would have taken much longer to recover for them.

HERE IS A VIDEO FROM NOVEMBER:
https://www.youtube.com/watch?v=6V4WGr5kRAI

Our Thailand adventure has begun early in December – we have arrived on December 3rd and I must say, the journey has been hectic. It was the longest we have been during TRANSIT as a whole family so far, and I was certainly not prepared enough in terms of FOOD.
YOU NEED TO REMEMBER THAT OUR KIDS AT THIS POINT HAVE BEEN DURING RECOVERY STILL AND THEIR BODIES RESPONDED TO EVERYTHING MUCH STRONGER COMPARING TO SOMEONE WHO’S BODY WOULD BE ALREADY FIXED (I MEAN THE GUT HEALING).
The trip TOTAL took about 36 hours between start and finish. Let me break it down to figure out the mistakes and improve for the next time.
I have prepared several jars of smoothies and containers with precut fruit. I had a bag (about 2kg) of dehydrated bananas and about the same amount of dates. I also had 1 bunch of grapes and 2-3 kg of bananas for the fresh start, some crackers, nuts and seeds for later. I know I should have taken with me MUCH MORE whole fruits like oranges or grapes, that are easy to carry and open without any tools. Probably I should have taken with me plain rice or steamed potatoes, I didn’t wanted to give to my kids any cooked foods, but it could have been easier and we would have been able to fix that quickly after. I was counting on the meals on a plane. I had no idea the meals will be so minimal and also the fruit was not ripe and not sweet. Kids wanted more right away….

Here is our TRIP/FOOD schedule:

1) night train Gdynia-Warsaw (6 hours) – we went on a train after dinner at home, kids ate some more food on a train before they went to sleep. It was good. We actually left our food-box at the train station (during saying goodbyes) and my dad drove to the next train station (about 30 minutes away) to catch the train once he realized that. It was a scary moment, because we would be without any food right at the start.. but he made it!
2) at the airport before boarding (3 hours) – we had breakfast – smoothies/fruits from our supply. I had one jar of smoothie left for each of the boys for the next meal. Some fruits in a container, and all dehydrated stuff.
3) 1st plane Warsaw-Qatar (8 hours) – after the “meal on a plane” kids were still hungry, so they finished all their fruits and smoothies. We gave to the kids any of the foods that were good for them from our plates, but me and Kris had almost none. We asked for any meal they may have left in the kitchen. Originally I have ordered the fruit platters only, not knowing their size and quality. I should have ordered just a vegetarian meal instead. Just to The amount of the fruit is sufficient for a desert not for a meal. I have learned hard.
We were lucky to get 2 portions of rice with chicken from a stuff. I removed pieces of meat and we ate the rest, not showing it to the kids. I decided to give to the kids orange juice, that was available on a plane. Finally we have landed.
4) at the DOHA airport, Qatar – (4 hours) – we went to look around, found more dates and a store with some organic juices. We got these. We still had dehydrated bananas. It was a little bit of struggle but everyone was pretty tired, so we were hoping that we will sleep on the second plane, food will not be as important. At the airport we did not find any place that would sell food according to a diet, so we have decided to stick with juices, it was easier.
5) 2nd plane Qatar-Bangkok (6 hours) – there was a similar situation with a meal on a plane, but we already knew what was coming, so it was easier.  More juices and last pieces of dehydrated bananas satisfied our hunger. Kids dropped to slip finally at the end. We were exhausted.
6) at the Bangkok airport (4 hours) – kids have been asleep all the time at the airport. I went with Troy, who woke up and was hungry to look for some food. We found a nice fruit-station and purchased our first young coconut, that Troy has finished it in 2 minutes followed by a nice watermelon smoothie. We got a couple more of coconuts for Maya and Travis and smoothies for us. It was most amazing food! We were saved.
7) 3rd plane Bangkok-Chiang Mai (1hour) – kids have been still asleep, we had to carry all three of them onto the plane and off the plane. It was pretty funny to watch..
6) by car Chiang Mai-Phrao (2hours) – kids have been still asleep, we got to Warm Heart village first and everyone woke up. We shared a couple of watermelons… It was good to be on the ground again.

After this really difficult trip we learned to take it easy and do not take too big challenges with the kids yet. Until they are undergoing the body REPAIR we need to anchor here in Thailand for a while, till this process is finished. Also they are pretty small (Troy is still a baby and asks for a lot of attention) we need to take it slow and have no pressure. Next plane trip will also be accordingly adjusted with much better meal planning. 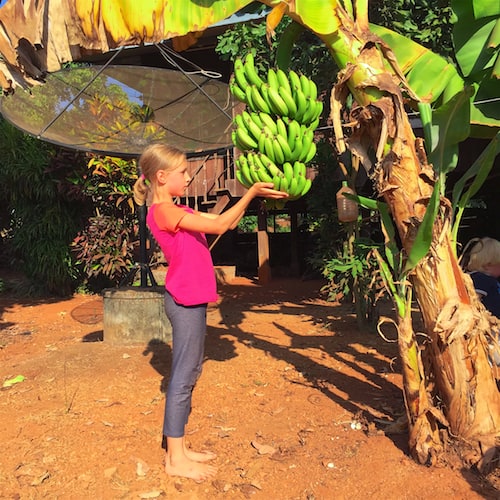 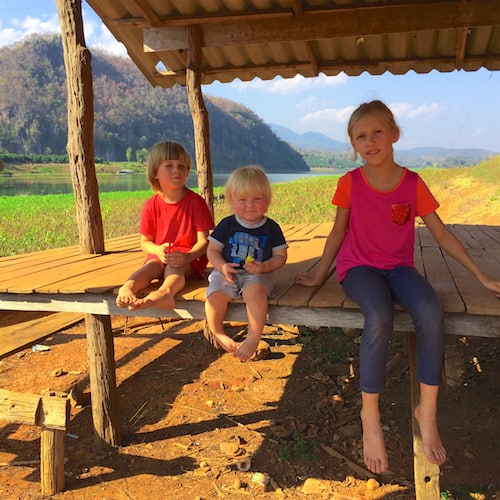 Once we have arrived in Thailand things started to look better everyday. We have paid a bit of a price with worsening our kids condition, not as much as the first time though, but week by week they were getting back to normal, thanks to great fruit, healing sun and amazing weather.

Here is video from DECEMBER:
https://www.youtube.com/watch?v=AW8pNO3SNJM