Everyone, please meet HENRY, brave and sweet boy from Oregon, USA.  His amazing Mom, Rachael, after seeing Maya’s picture has found his story similar to Maya’s and decided to try doing just the same, following my book The Fruit Cure, where I share the story and method, how I healed my daughter’s eczema. 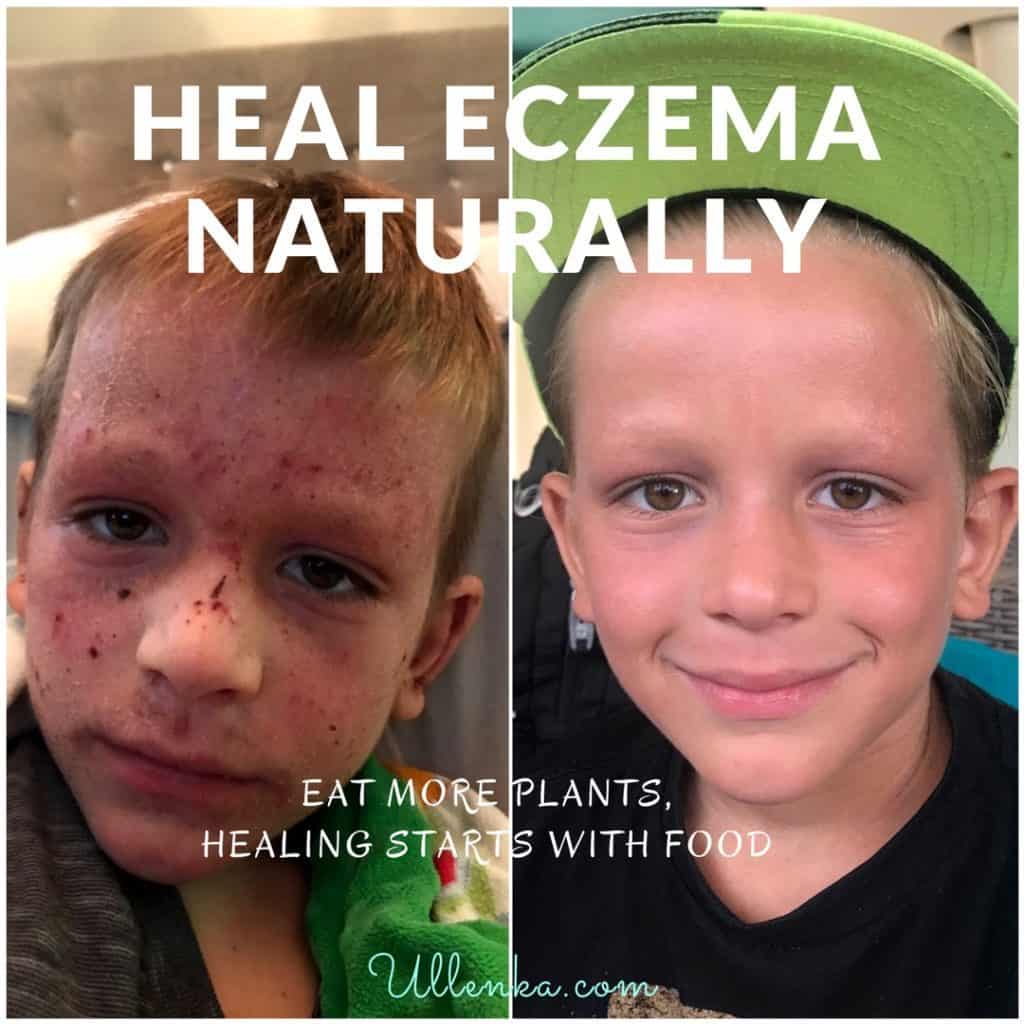 This is how it had begun: 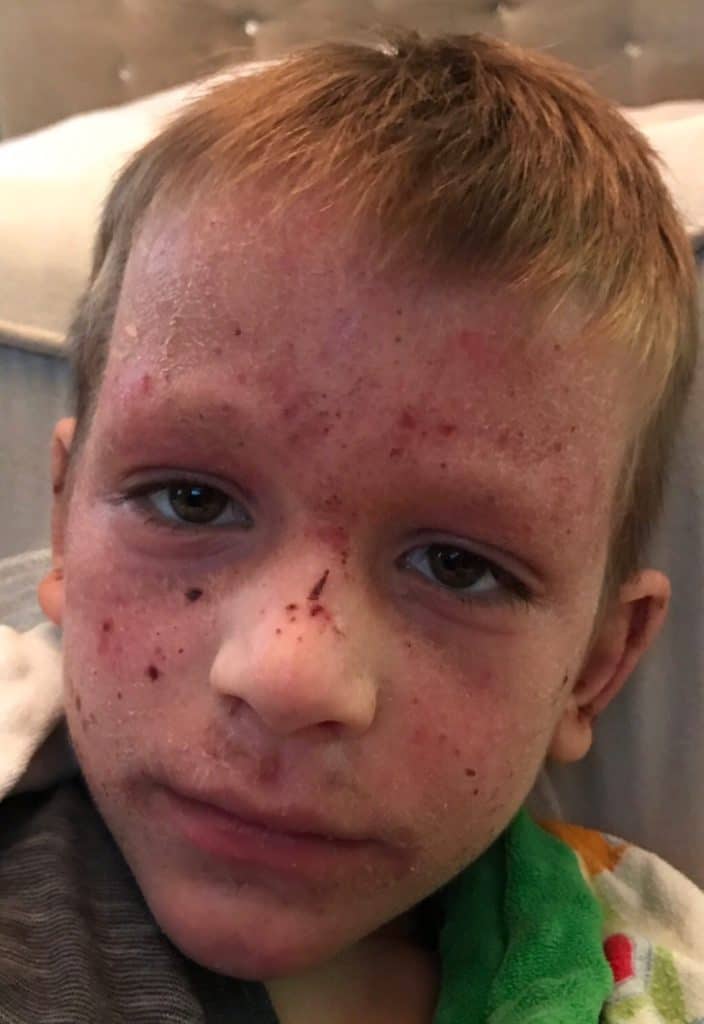 Here is Henry’s story before approaching the diet:

“Henry has had eczema since birth. It was not very bad when he was a baby. Just on his cheeks. As he got older it slowly got worse and worse. By two it was quite bad every winter with clearing in the summer, by four it was bad all year round. The doctors kept telling us he would grow out of it but clearly that wasn’t happening. Year 6 and 7 were the worst just before we started this diet he was absolutely miserable. Missing school, couldn’t sleep, in screaming pain all the time. We tried everything. Different diets, he has been off dairy completely since 3, we tried gluten free, probably 4 or 5 other diets I read about. Some worked a little bit nothing really worked enough. We tried clearing our house of as many chemicals as possible. I home made all of our cleaning products, our shampoo etc. We also went to many doctors, dermatologists etc. they just gave us steroid creams and didn’t really have any other solutions. The topical steroid worked when we used it, but I tried not to use it often because I new ultimately that it wasn’t good for him. We got blood and stool tests to see if anything else was going on but everything came back clear. We had some really hard times. He was in the hospital for a week with a staph infection on his whole body. Which meant major antibiotics, which made his eczema worse after the infection was healed. We started going to a naturopath and got him on supplements to help heal his gut and organs so that they would function better. While this helped, again it didn’t make enough of a difference. Just before we started the diet we used steroid ointment again and instead of helping this time it made him worse. I don’t know if he was building up an intolerance or what. But it was horrible. ”

The Fruit Cure journey had begun in JUNE 2017, this is how Henry’s skin looked like after 7 days on the diet: 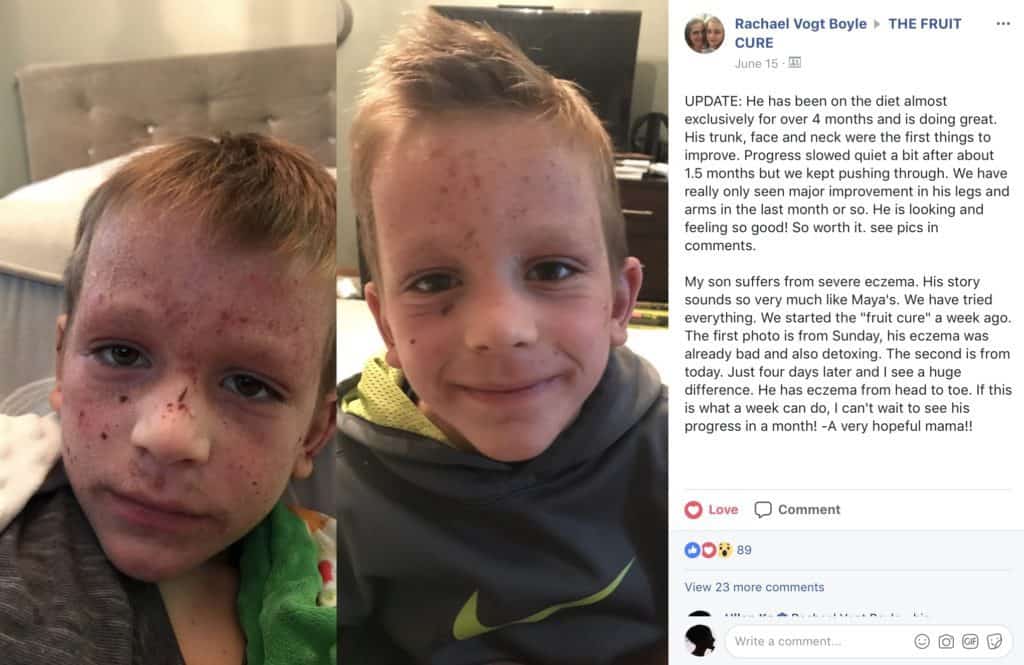 Rachael was continuing Henry’s treatment following my advice from the book, as she mentioned that a few times in her messages and posts. I was extremely happy to witness Henry’s healing steps and seeing this gorgeous boy coming out of his crusted mask… Soon Rachael posted Henry’s picture showing his major improvement, I was more then excited for them and happy to tears. 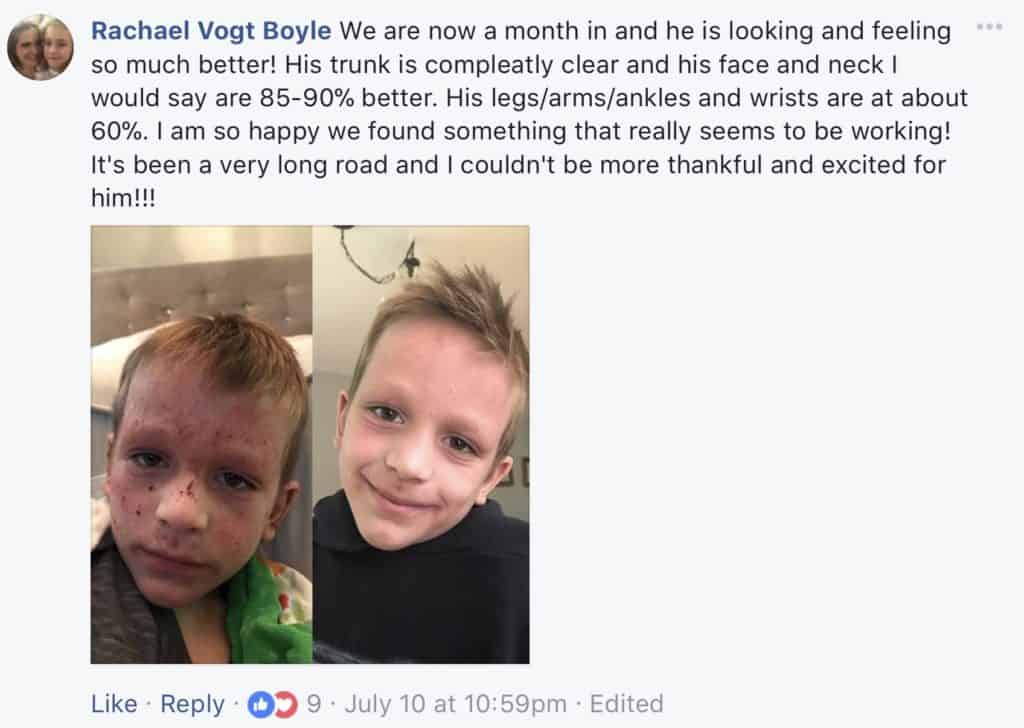 But this is not THE END yet!! WAIT!

Few months had past by. The journey continued and from what Rachael had told me, it was a path of ups and downs, but Henry was still making the progress, a bit slower. I wish I had a Green Fix protocol already developed and it could be a game changer for him. But they pushed through anyway and the final moment came!

My latest recomendation for advanced eczema is to follow Ullenka’s Green Fix protocol first before starting The Fruit Cure. During upcoming webinar on Tuesday, Jan 16th, I will be explaining how that works, you can sign up here:

Believe it or not, but right on my birthday, October 23 (I will never forget that), the day I published my new website and offered to the world my new Green Fix protocol. Rachael had posted Henry’s picture, with the most beautiful smile on his smooth face. I cried. I am a very sensitive and passionate person. Situations like this make me feel the emotions deep inside my heart and I coudn’t stop the tears of joy. I was shaking and smiling but my heart was jumping with joy. It is even hard to describe that moment and I will always remember it. It was the best birthday gift I could have ever received. (Rachael had no idea it was my birthday!!! She just posted an update). Here is the photo she had posted in the group: 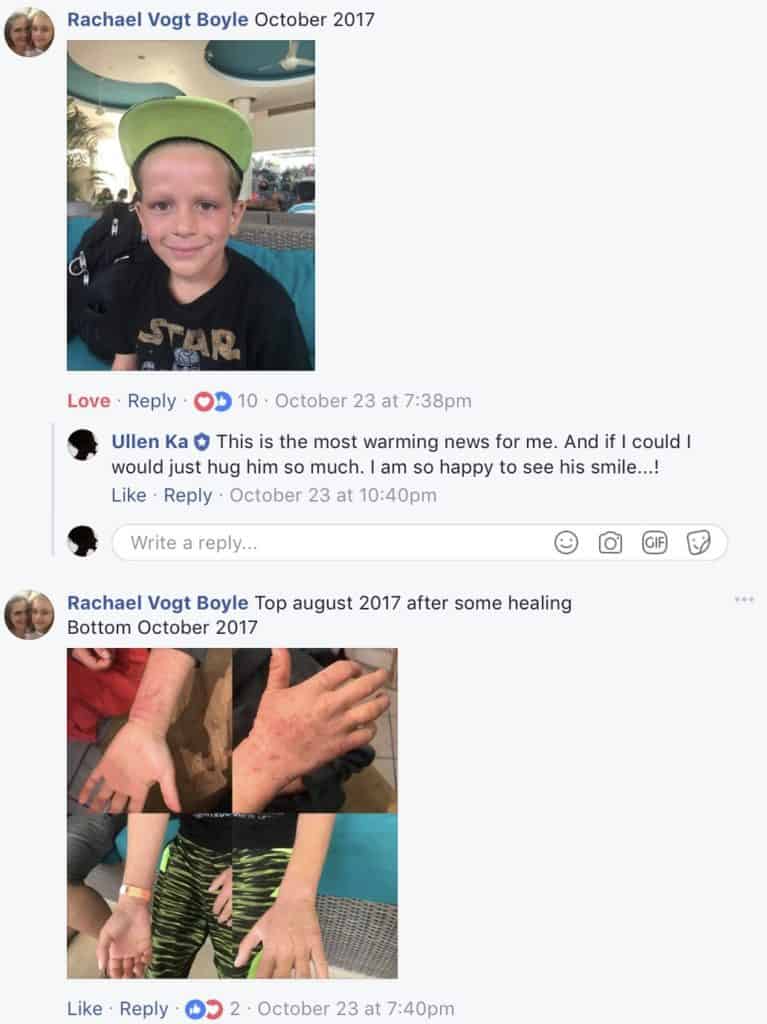 Those pictures speak for themselves. I congratulate both of them, this takes guts and determination, but the effect is so worth it! They got their life back!

See you tomorrow on the WEBINAR!!! THE ECZEMA WAR is ON!!!!
You can sign up here: 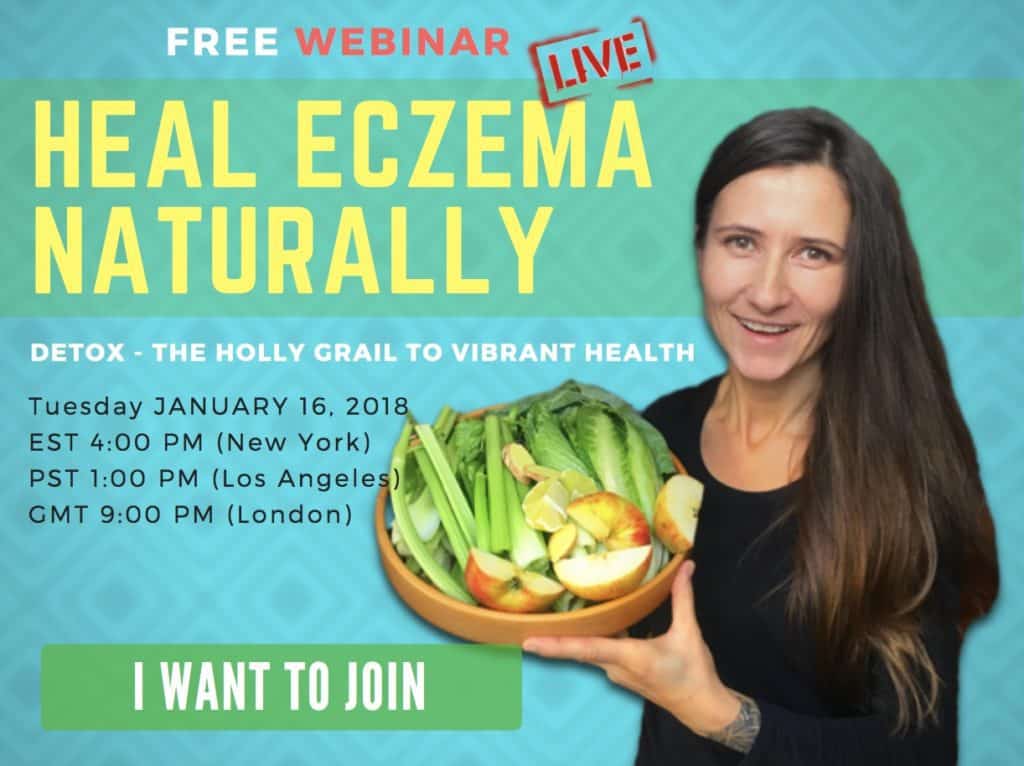 Yours,
until the last eczema is gone…