What Troy eats on a random DAY 1 (in Thailand)

I have decided to do a series of posts about what my kids eat daily to discuss more details about nutrition and choices. For now it is easier to share this for me on the blog, but soon I hope we can also make for you some videos too. 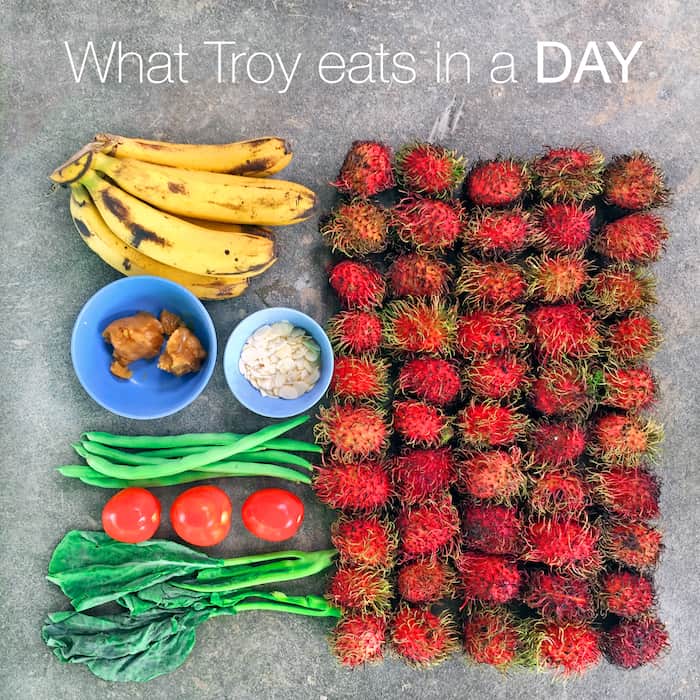 1. Breakfast: 4 medium Banana smoothie with kale, chia, coconut sugar
2. Second Breakfast – 10 peeled and sliced rambutan fruits
3. Lunch – approximately 25 pieces of rambutan, it takes a while for him to eat it.
4. Snack – a spoon of sliced almonds (must be crunchy or he won’t eat them)
5. Dinner 1st course – rest of the rambutan (about 15 fruits)
6. Dinner 2nd course (about 1 hour later) – few steamed string beans with sliced tomatoes. He usually eats one thing first and then the other, without mixing. He also ate about a tablespoon of plain rice. When it gets cold he doesn’t want any cooked food anymore.

My kids can set an example for parents who struggle with picky eaters. All three of them have unusual sensitivities to touch, smell and appearance of food. They do not eat some of the foods because of the specific smell or consistence. It can be very challenging at times. I must say it is getting better and better as we progress with the diet. It must have to do something with the condition they used to have and their immune system is over-reacting, causing the specific respond and behaviors. Diet is fixing those issues slowly and I can see the change in them, trying some new foods is easier and their selection increases.

First up is TROY.

He is 2 years 4 months old today. He is still eating a little bit differently than my older kids, simply because he is still very small and his chewing abilities and tastes are less mature. He was fully raw from 13 months old for about 6-7 months and I started to give him small addition of steamed veggie or starches when he asked for it, but the percentage of cooked foods in his menu reaches no more than 5%. He is still too little and doesn’t eat typical salad at the evening. He eats his greens in smoothies. He likes to eat every type of food as a mono meal so far, even for smoothies he chooses only one type of fruit with greens. He started to eat a little bit of cooked starches few months ago, but in really small amounts, like a spoon of rice or 1/2 potato. He is not much into cooked foods anyway. 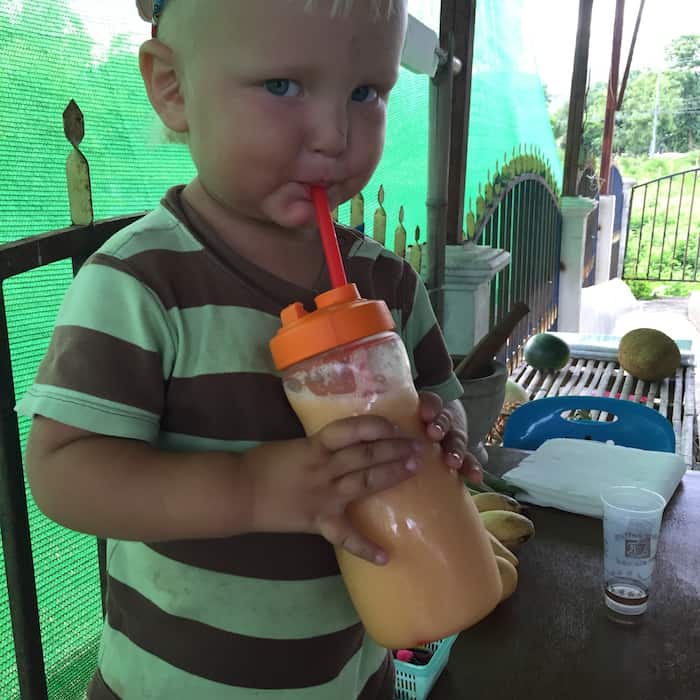 He usually loves his smoothies in the morning and for dinner, he likes sweet and juicy fruits to enjoy through the day and snacks on seeds, but not much. I have a little bit of a dilemma with him, as he is not into fatty foods at all. He used to eat a half of young coconut per day or a quarter of avocado, but he refuses to eat those right now. He also is not going to drink his smoothie if I add some fat in significant amount. So the only fats he is eating are some seeds in crackers, dehydrated young coconut meat (I discovered this as an option that interests him), little amount I sneak in his smoothie, like 1 walnut, 2-3 almonds, teaspoon of chia or flax, 1/8 avocado, 1 spoon of fresh coconut meat etc. I need to be very careful and do not exceed the amount that he likes in taste. Avocado much changes taste of banana smoothie, so the key for me is to go little and steady over the entire day. 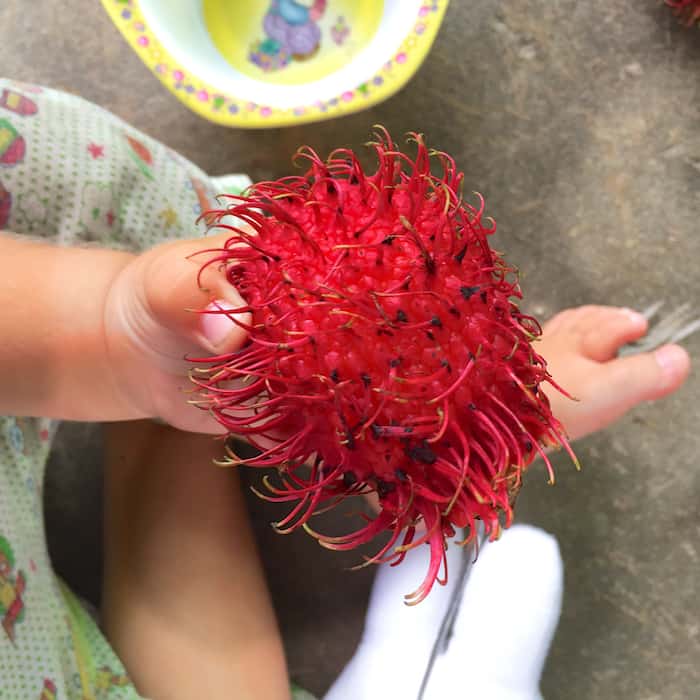 He also has “seasons” for his favorites. When he finds the fruit that suits his buds at the moment he is going to eat mostly this one for a few days or even a week. He usually keeps the green morning smoothie routine, but for the whole day he asks for the same thing over and over again.

Currently we are in RAMBUTAN season, which is correct, because it is at it’s peak in here. Rambutan right now is very sweet, very juicy and tastes really good. He is eating about 2kg per day (weight in shells). When this “season” continues he is eating much more calories per day than usual. After the “season” he slows down on calories and eats much less per day until another discovery comes along.

Before rambutan, about 2 weeks ago he was on pineapple train, eating 2 medium-large pineapples daily. I think it is quite natural and makes a total sense. He is not overweight from eating so much calories, but he is also not a skinny baby. He has a bit a tummy and round face, but his legs and arms are thinner, he looks just perfect for his age.

Here is the table of calories of what he was eating yesterday, copied from CRON-O-METER.com:
(there is no choice of fresh raw rambutan, only canned, but the difference would be about 40-50 calories less than fresh based on this amount): 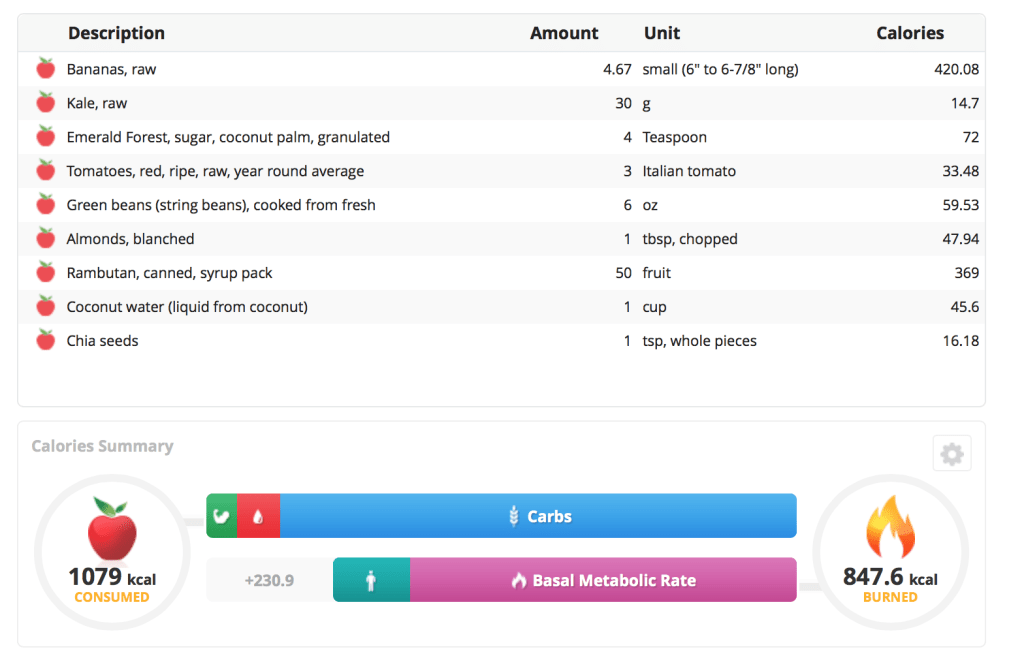 His calories are great, lets look at the nutrition charts, also copied from CRON-O-METER.com: 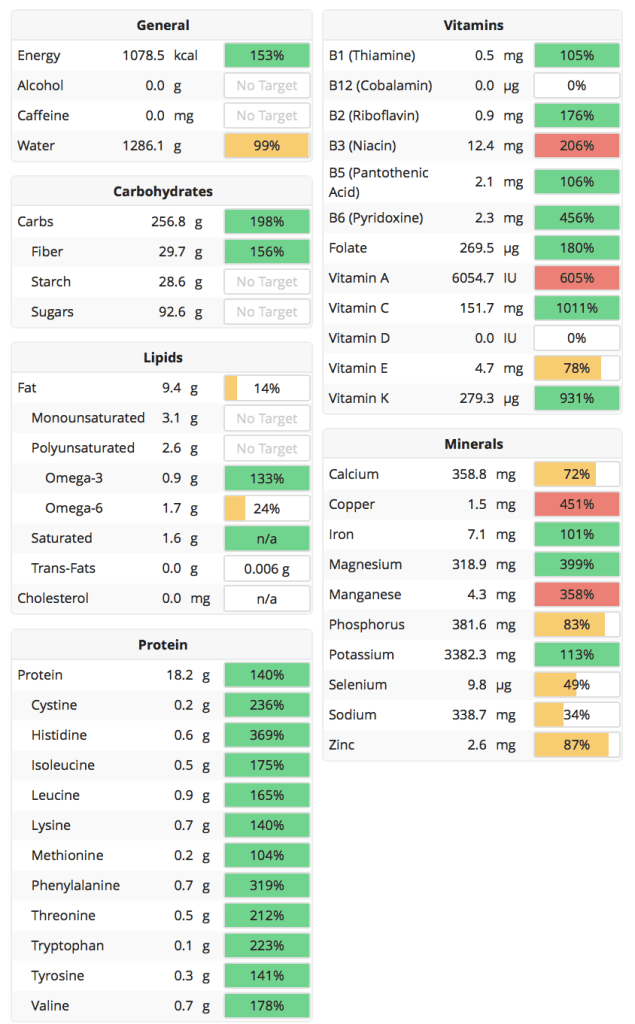 I do not want to go into so much details, but lets focus on three things, that I widely explained in my eBook “The Fruit Cure”, just to compare with common beliefs:

1. protein – Troy was eating FRUIT for ~ 95 % of his meals and if you look at the recommended standard dose of protein per day, he GREATLY exceeded  this amount. Not only this but all of the required amino acids are met above 100 of recommend amount. I can’t imagine how much protein are eating people on standard diet, when most of the processed foods are packed with protein, however I would still doubt their quality and variety. Fruit has very little of protein, just 5-10% of calories (which is about 1-2% of content) but from eating much of fruits we collect a great amount of very good quality, plant sourced protein, that body absorbs so well and also tolerates well.

2. fats – there is a deficiency on Omega6, he may catch up on those the next day, but he generally eats less fatty foods, so if you add a half avocado here and a little some sunflower seeds, the nutrition for this daily menu would be perfect. We are working on it and progressing slowly. The other thing is, that standard recommendations for fats are much higher than it supposed to be according to 801010 book (with adjustment for children 0-10y.o.), so probably we are good as well.

I will do the same analysis for 2 more days for Troy and I will move up to Travis and Maya, to compare and see how the values change. Let me know your thoughts and please ask questions and also suggest what else would you like to know. Let me know it this was helpful.

For some reason I got challenging kids. Raising them is not an easy job, not many know this better than me. But facing this everyday for many years already has given me an experience and knowledge that I will be sharing, because I think it has happened for a cause. Somehow we are overcoming this, which is why I want my struggle to become your strength.

Happy reading and see you on the next blog on Monday, at about the same time.

In my ebook I explain most aspects of nutrition very well, using comparisons and life situations, with all the details, I addressed also most common concerns. The eBook is available here: 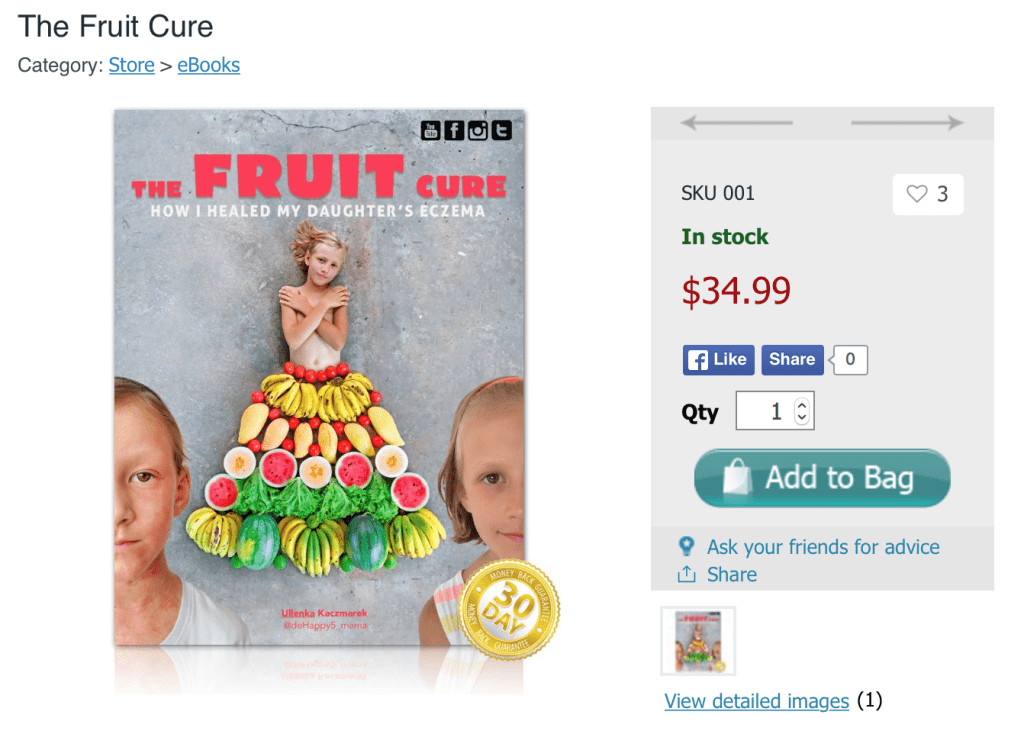