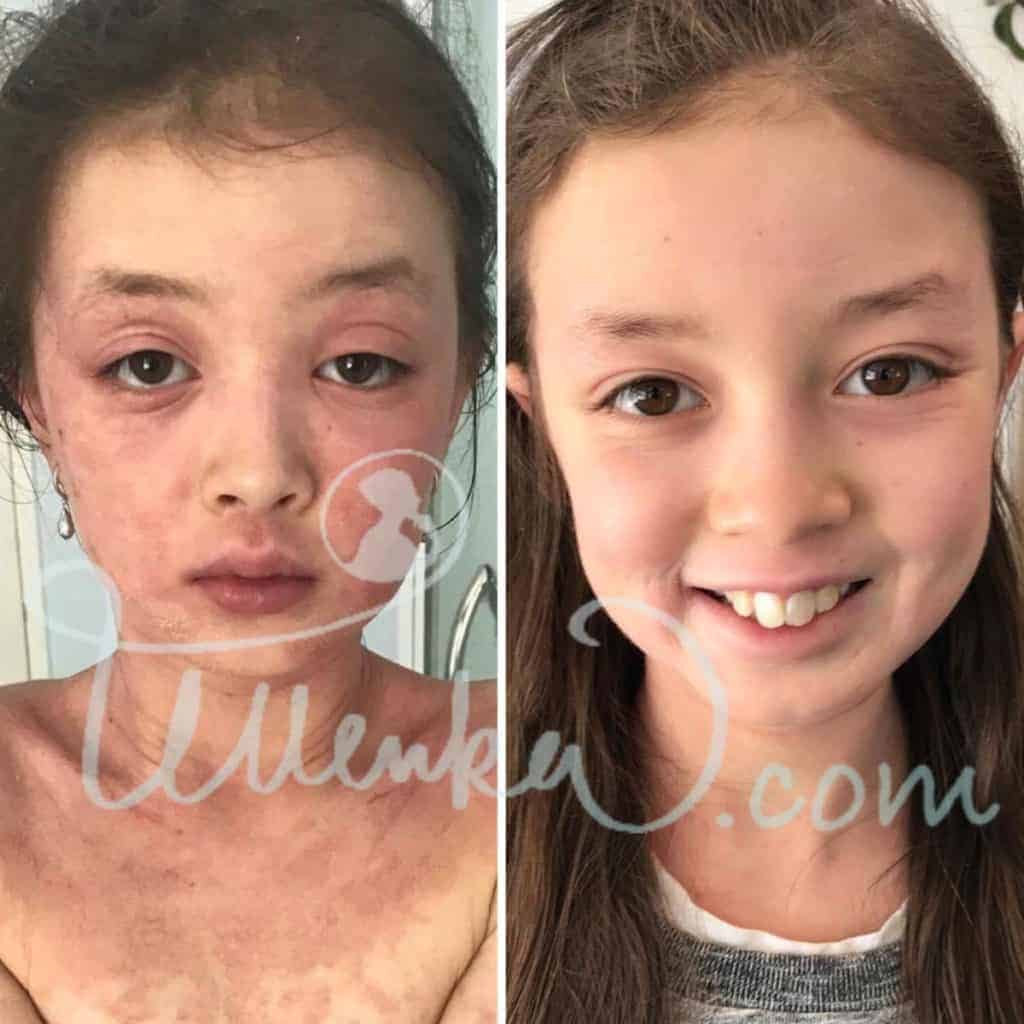 This is TAVÉ, a brave 10 year old from New Zealand, and this is her healing story: 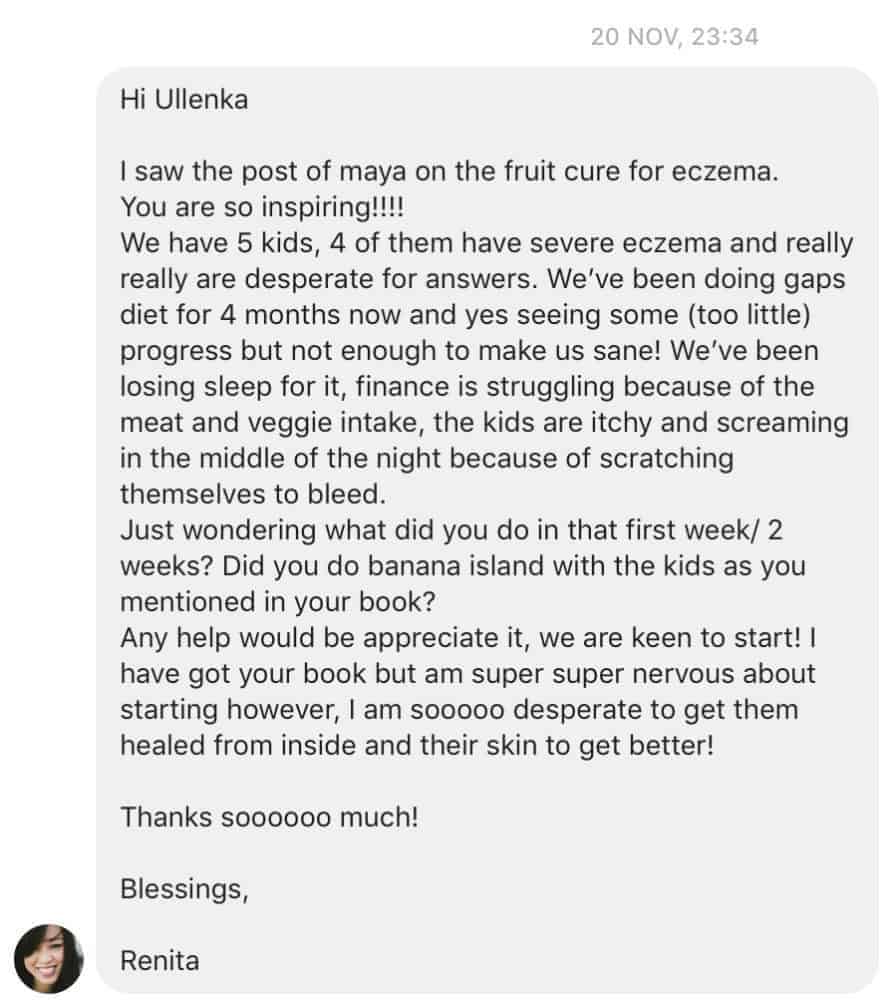 And then we started with this: 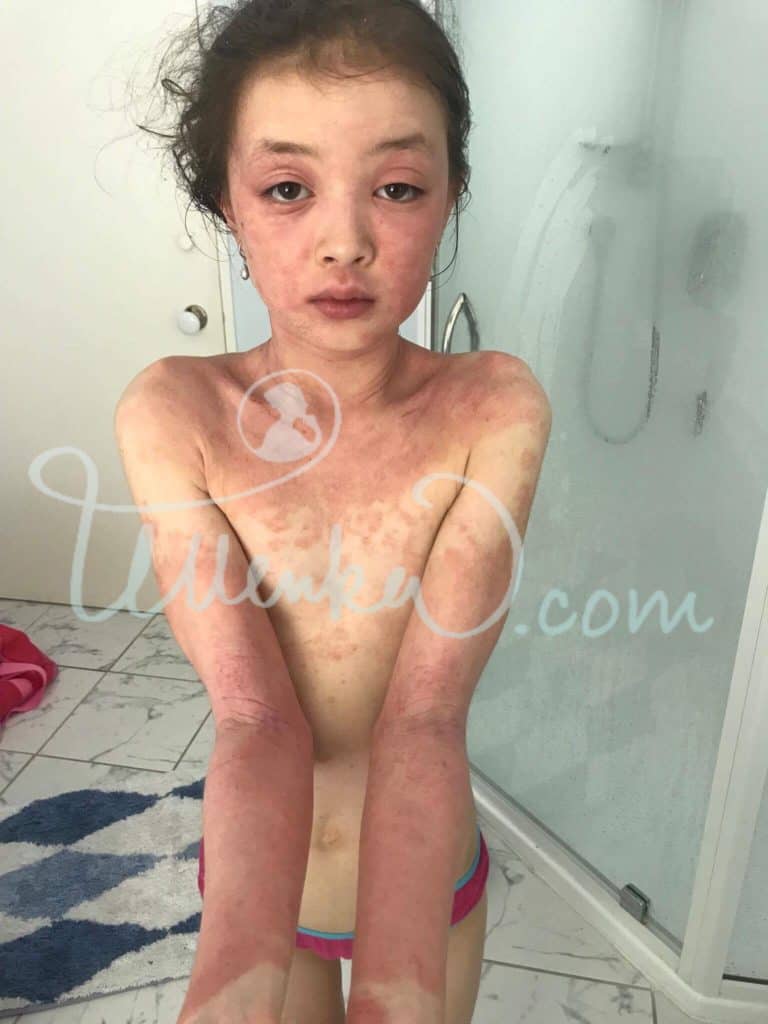 TAVÉ was not sleeping because of horrible itch and bleeding at night. Her parents and sibilibgs could not sleep normally too. This has been going for over 4 months. After few days, once Tavé’s mother put all the kids on Ullenka’s GreenFix program, she wrote me this message:

We kept in touch for the first weeks and Renita has been really good and disciplined with the change. She read my books , she listen to my advice and most importantly she listen to her own gut. She was determined and ready to go all the way, to help her kids. That’s what actually matters most. Let me explain:

We are what we do daily. We can change things, but to experience a permanent change we have to create a HABIT out of it. It has to become natural (or almost natural). The secret is to push a bit at the start, just like the space shuttle is launched or an airplane goes up, or even to light the campfire. It’s always harder at the beginning, it takes time to get that fire going! That’s what she did with my help. She was the one who was keeping that fire for the first 1-2 weeks, until everyone got a bit more used to new style and actually begun to see the effects and also to like it. During that time, I was ready for Renita’s next question to give her confidence in herself and she was on top of the game.

Finally, few days of days later, we started to see some first but great signs of progress!!  Those are pictures from day 4th: 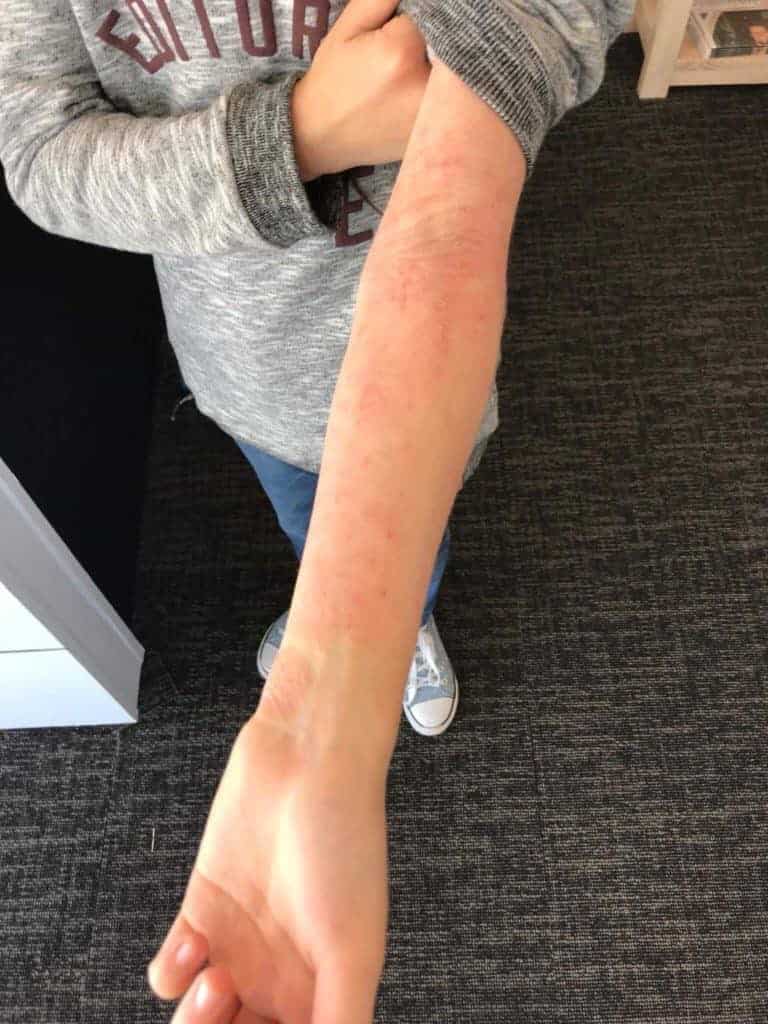 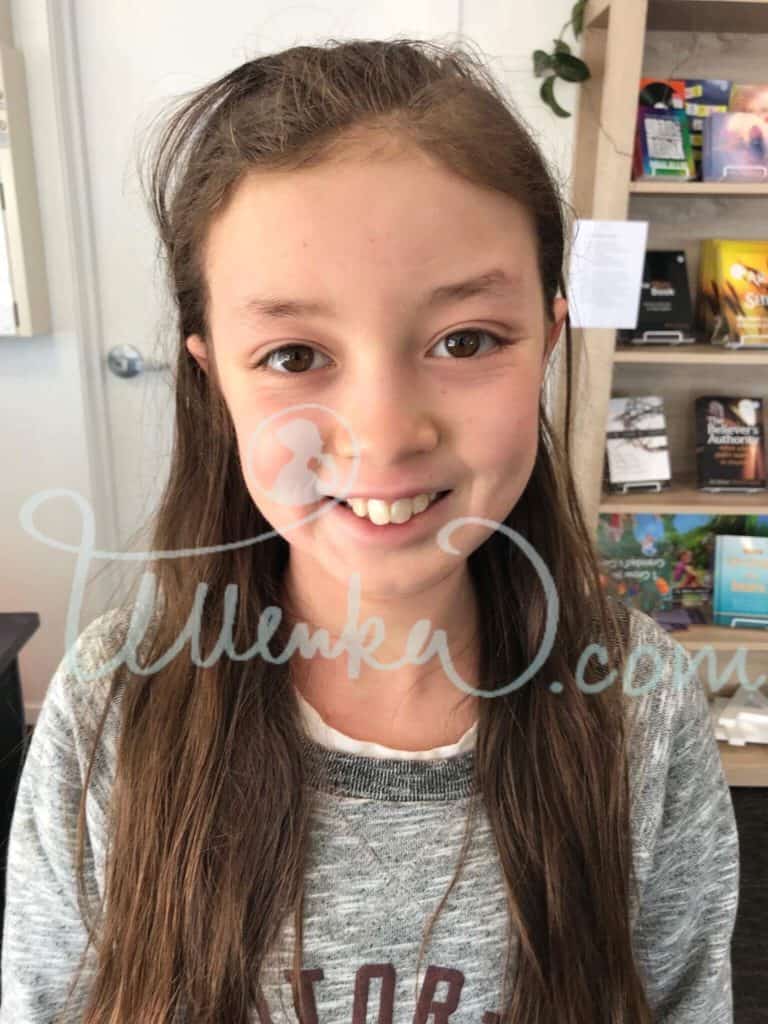 Tavé slept through most of the night for the first time in a while and she also wasn’t red on her skin anymore, right in the morning, which was a regular thing since long time.

She still had a lot to cleanse and heal, but she could smile and bend her arms again!

Next days had been a journey of ups and downs. One day much better, when the other a little worse and confusing again. I was reassuring Renita from what she was telling me, that it is all going well and that’s a very fast progress already. I told her, she’s done an amazing job in such short time!!

Here is what she actually wrote, when I asked her if I could share their story:

“When Tavé was born, she was given antibiotics. We had her immunisation up to date as well not knowing what’s better for her…. being first time parents, we just listened to the doctor.
When she was 2, she started to have eczema patch on her arms crease and behind the knee.
Just before she was 3, i switched to another doctor who was really into natural things. She put Tavé into a deep detox as Tavé was tested to have parasites. During the detox, her eczema worsened massively. I remember on her 3rd birthday, she had to wear a long sleeve shirt as her eczema on her arms were so bad.

Tave’s eczema seemed to have settled after that and only appeared in winter or some odd times.

2 years ago she started to have sugar addiction. She sneaked in wayyyyy too many sugar into her diet without me knowing and that totally tipped her gut health off. Her eczema then came back more rampage than ever. We tried to do parasite detox for her and it did somehow helped.
But in June 2017 her eczema gotten so much worse…. where it never went past her arms and legs, now is spreading to her face and neck. At the same time when she was having her rampaging eczema, 3 of her younger siblings also has severe eczema. Her sugar addiction was still there and I didn’t know how to stop it. I then put my family into GAPS diet.

We did GAPS for 5 months. it was the most gruelling, challenging physically and emotionally for me to do. The diet required alotttttt of cooking (for breakfast, snacks, lunch and dinner) and the kids seems to be grumpy and hungry alllll the time.
In the last 2 months of the gaps diet, we noticed a bit of improvement but not much. Kids inflammation was so much worse and they’re not sleeping because of itchiness and a lot of time, skin bleeding because they scratched it too much and we’re not sleeping either. That’s when we said enough is enough.

We saw ullenka’s e-book about 2 years ago when we battled eczema with our middle child and the diet seemed to be far fetched for him to do as he never liked fruit let alone I couldn’t imagine him eating raw veggies.
But this time we were desperate. Desperate for break through in our kids skin and for Tavé to sleep and be comfortable. She missed a lot of her morning sessions at school because I let her sleep in (by that time she kept waking up 3-4 times a night and couldn’t sleep for ages because of fear of scratching and bleeding again)
So I prayed asking God to lead me to something…. something to heal my children! That day I listened to Anthony Williams’ podcast on eczema and on the same day I saw Ullenka’s The Fruit Cure e-book for sale again on Facebook (after not seeing it for 2 years!) and I just bought it.

I read the book, got myself into the group The Fruit Cure on Facebook and went cold turkey from gaps into raw vegan in one day. In one week, the transformation was amazing!!!!! From not sleeping, we were all starting to sleep!!!!
Tavé had the worst case out of them all… she was still waking up but instead of 3-4 times, she woke up once. And we did put her into a faster detox which was Ullenka’s Green Fix for 4 days.
We feel that it sped up the process and she didn’t have the redness in her skin by Day 4 in the morning.”

It has made me extremely happy to see pictures of Tavé’s healing. I was excited the same way as if it almost was my own daughter. I know that pain so well, it hurts me to see someone struggle and suffer. This is why I keep doing what I am doing and sharing stories like Tavé’s is my biggest honor and reward for my work.

Here is TAVÉ and her siblings today, it’s been about 6 weeks since she started her healing journey, there are still some patches on her body to be healed, but she can already wear a swimming suit confidently, and she is a gymnast!!! 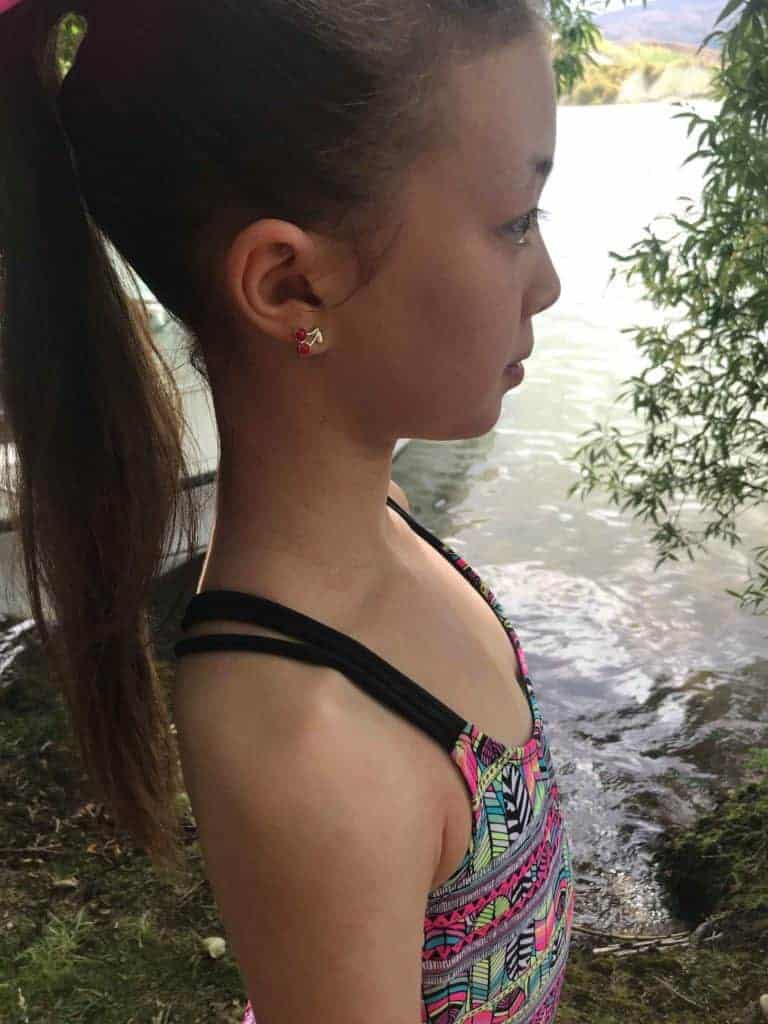 Yours truly, (until last eczema is gone, then I can rest).