HUGE NEWS TODAY! I am beyond happy to share another amazing ECZEMA SUCCESS story with you. READ and SHARE, it can help someone who struggles and doesn’t know what to do.

This is little TUDOR: 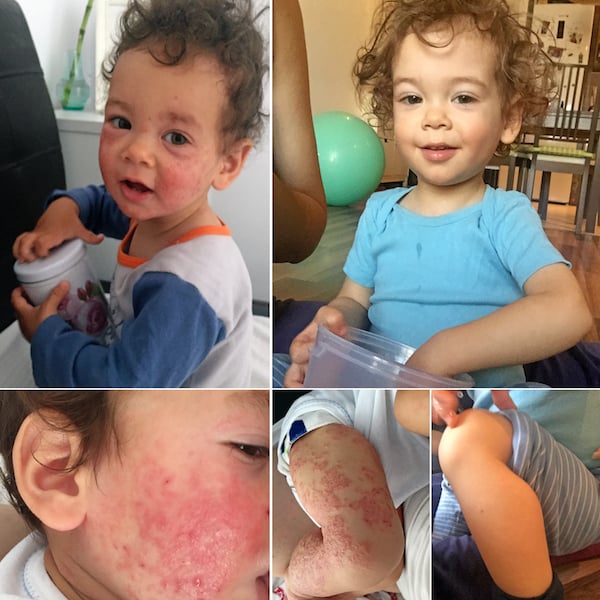 His Mom IRINA came across Maya’s story and got my book back in July 2015. She has begun the diet for herself and her son at the end of July 2015. She was still nursing, so she had to follow the same diet as him. IRINA also joined the Facebook group, where “The Fruit Cure” readers can exchange their experience and share their journey. We worked a little bit together during last 6 months. The recovery wasn’t a smooth and easy process. Every person is very different so she had to make her own choices and decisions all the way through. I was trying to support her during those most difficult moments and she kept going. It was amazing to see the progress. We were both concerned many times as well as happy when everything was going well. She was very determined and took all advice to heart. I know that almost anyone can do the same, with patience and love, being consistent and not giving up. Maya story wasn’t straight uphill to clear skin either. On top of eczema issues, Tudor also struggled a lot with weight gain, and his Mom Irina was worried a lot about his nutrition. He had respiratory problems too, coughing a lot and worrying his mom with getting sick pretty frequently in the past. He was having mood swings, crying a lot and did not sleep well. Irina had a lot of work to do, but she has made a decision she wants this to STOP it.

Here are some BEFORE pictures of Tudor (thank you Irina for allowing me to post them): 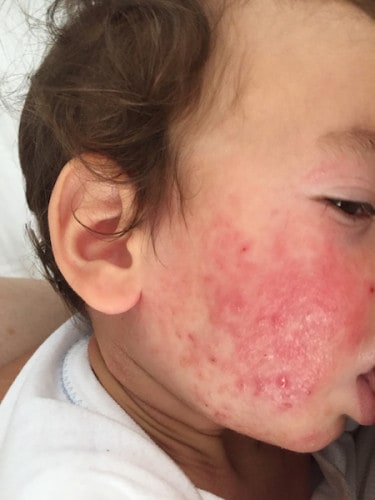 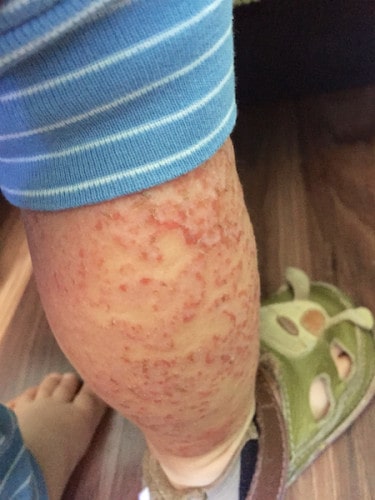 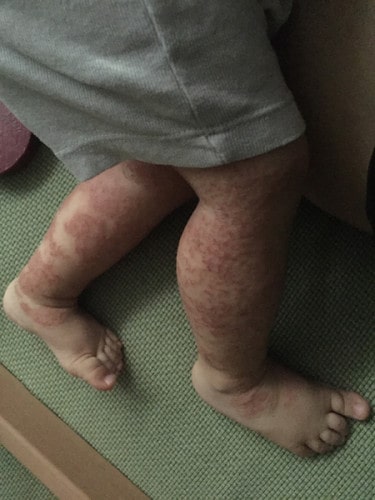 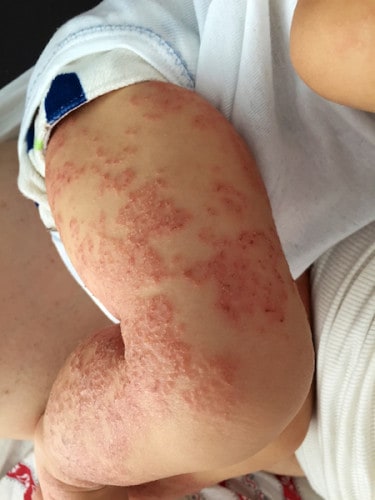 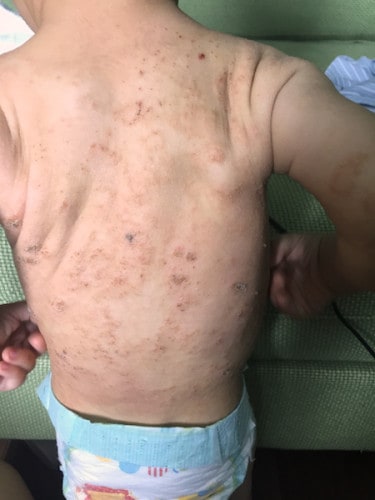 “Hi Ullenka, all, I have a 13 months old son with severe eczema which is at its worst now, tried a lot of traditional and alternative treatments so far, dieting, but became somehow desperate to move things faster. I started my reaserch a week ago on your page, and read all the information and your book also.  Yesterday both me and my son started the diet, and that’s when his eczema actually got worse, his skin, stool and pee were smelling so bad, in the morning especially . I think that was just detoxing… His skin was so red and looked really heartbreaking in the last days, yesterday included, he was scratching a lot. But…after peeing a lot yesterday…. I see improvement today. First of all, when I went to his room this morning, there was no bad smell anymore. Second, his skin is less red and inflamed, the spots that yesterday were firey red, today are pale most of them, and there are no more wet spots. I started this diet with a lot of excitement and optimism, I hope it will work for us too. I am a bit worried he won’t accept the smoothies, in the beginning at least, as he is breastfed and doesn’t drink a lot of liquids whatsoever, only water, but not much. Probably it’s just me worrying, and he will adapt quickly to this, I will see how it goe. Hopefully I will get back soon with good news. I am really greatful for finding your story on Facebook and finally did some more research on this. Thanks for your support and dedication, Ullenka!”

“Hi all, I just wanted to share with you some pictures, saying more than words. We started the diet last Thursday, we are now in day 6. Tudor’s eczema is a lot better. Hopefully I will share even better news soon! Thanks, Ullenka !” 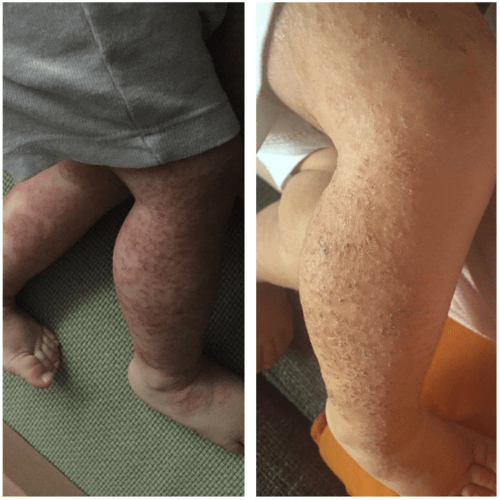 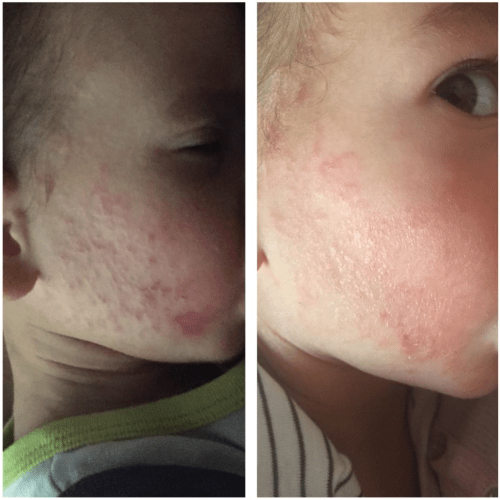 THIRD UPDATE (July 17th):
“This is our progress so far. We started this diet on the 30th of July (now we are in day 19). The improvement was huge in the first days, then he had some new flare ups (on his face and arms), and the ones on his legs were kinda red all the time due to a lot of scratching. The scratching reduced, but still does it when he is stressed. Add a lot of positive thinking and meditation with the diet, and it will work wonders! I am so happy and he is also so much happier than he was a few weeks ago. The thought of him being healed soon is better than any chocolate or other “forbidden” foods” 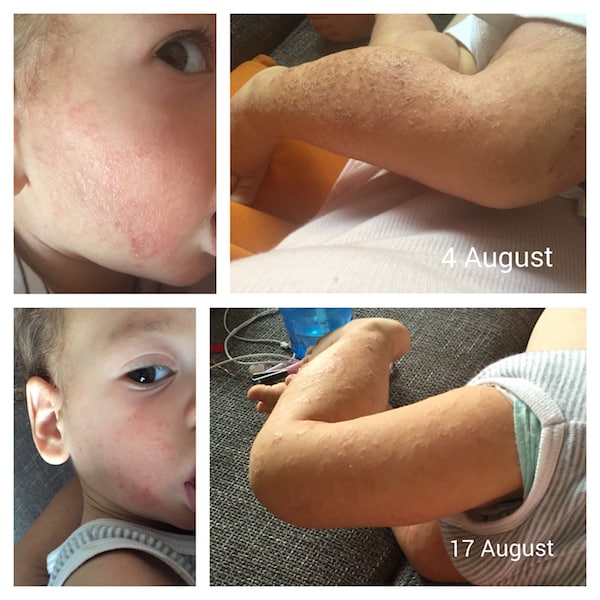 The first weeks went very well and shown a lot of progress. From that moment Tudor was doing better and better and slowly eczema was going away. There was a lot of ups and downs, a lot of concerns, but she was following the plan, asking questions, looking for answers and it was working. However like I said the road to healing is bumpy and sometimes very confusing, things could look really bad again, and they did:

FOURTH UPDATE (Sept.18th):
“So it has been a month and a half. I am back to show you some more progress, this photo is from yesterday. I am so happy! It’s still a struggle with the scratching, because it would heal so much faster if he wouldn’t do it, but I need to learn to be patient. Ullenka, thanks again for being here for us!:)” 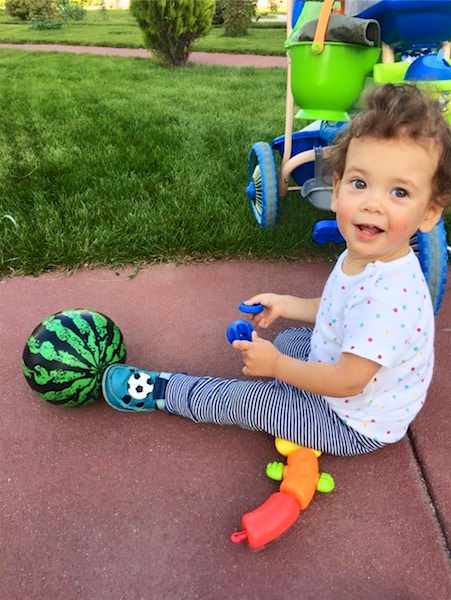 Tudor was doing better and better. He started to put on weight a little bit and looked healthier each day. But the healing wasn’t done yet and like I always say, detox has many stages and it is not a smooth process. There are those bumpy moments along the way. Triggered by something, either a cold or an infection, that it boosts the immune system to fight something hidden deeper in the body. Tudor used to struggle with a lot of respiratory issues and I think he had a lot accumulated toxins in his lungs. At some point, once the body took care of the majority of the problem, he got sick and the situation did not look good at all.

“Hi all! It’s been a while since I last wrote here, a lot happened meanwhile. Tudor was hospitalized twice in the last 2 months, first due to pneumonia and second – bronchiolitis. Before the first episode, his skin was almost healed, but then he was given antibiotics (I accepted it after they run some tests and because I was very scared seeing him having trouble breathing, though I am very much against antibiotics), so while on treatment, the eczema was completely gone… and once I stopped the antibiotics, his eczema came back really really bad, all over his body. 3 weeks later, no signs of skin improvement, he had a new episode of trouble breathing, this time even worse, went to hospital again, run some tests, it was a virus apparently, and they gave him steroids. I refused this treatment, but his condition got critical and I finally accepted it. It was the scariest experience so far, I won’t get into details, but I am sure it was the right decision at that time. I was afraid of the consequences for the skin, but one thing at a time… Now it’s been 3 weeks since that episode, the steroids treatment lasted almost 2 weeks… so it’s only about 10 days since Tudor is off steroids. His skin looks good, only one small spot on his back, and some on his cheeks but not too bad. There is some scratching, but so far so good. He is still on the fruit diet, most days raw till 4, but I think he is doing great. Overall, his condition improved a lot since August since we started, he gained 1,5 kg in these last 2-3 months (which is a lot, given that before, for half a year, he gained nothing, and even lost some). I decided to be thankful for everything that happens and to think that everything happens for a reason. These experiences only brought us closer together and since his skin is clear and there was (almost) no scratching, we focused a lot more on the joyful times, and he is soooo much happier I cannot even describe it. I hope this will be the end of the road for him. I will keep you posted!
One more thing I wanted to share with you, I watched a really good documentary (E-motion) which I think can be helpful for everyone dealing with illnesses but not only. It’s mostly about emotions, but it also highlights the importance of raw, colourful foods & sunlight & being in nature.

I hope there were improvements for everyone, and hope to hear some good news from you! Lots of love!”

The best thing is, even though Irina was pushed by the situation to use some medication, that she kept the diet for all times. We have been in touch while it was all happening, she had a very hard decision to make. I think it was for the better, because safety comes first. Tudor had huge problem breathing, it was way too risky not to use any. Keeping the diet at all times however has made it easier for the body to cleanse and like she wrote in her update, it got better at the end.

Here is her last UPDATE up to DATE (February 4th):
“It’s been a while since my last update, but I was somehow waiting for the storm to pass. It’s been a rollercoaster, with the respiratory issues and hospitalization and the doses of antibiotics and steroids he took in October-December, but staying on the high fruit diet helped him recover from the damaged they’ve done. So..it is now 6 months since we started the diet, and here are some pictures of Tudor being happy and eczema free (I would say 95%, he still scratches his legs). I know the process could have been faster with fully raw, but for us it was somehow easier with raw till 4 especially now in Winter. His skin is still sensitive, but he is so much stronger. Thank you again, Ullenka, for creating this group and writing the books and sharing your experience and knowledge. And for all of you still struggling, you are on the right track. 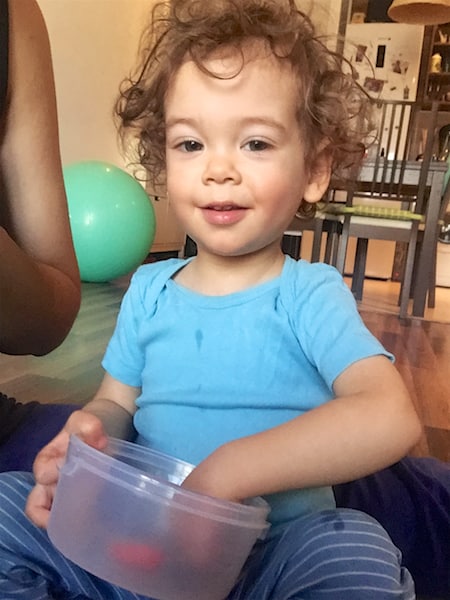 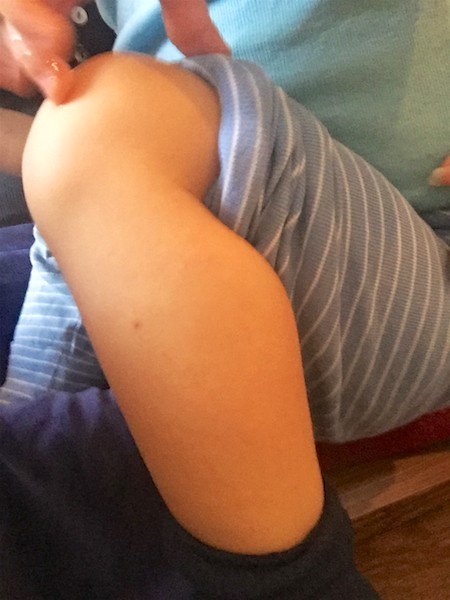 I am very glad I could share Tudor’s journey with you today. I want this story (put together from Irina’s original updates) to be a some sort of a guide for you. This road is full of surprises because each body is different and accumulated problems can be located in any part of the body, waiting to be released. Going through the detox seems to be the most struggle. This is why I think being in our group and having someone to talk to, to ask a question and to have a hand is very important.  I hope I was a bit of a help to Irina, however she was the one that had to go through this, making decisions and supporting her son. She is an amazing mother, strong and determined. I wish both of them a happy life! Thank you Irina for sharing your story with the world.